I don’t know if you are following the European soccer championships that are happening in France right now. For those of you who are not following, Germany very narrowly beat Italy after a dramatic penalty shoot out yesterday.

But I don’t want to talk about the German team right now. I want to talk about the team that has baffled all experts and even their own fans by advancing to the quarter finals – they actually beat the mighty English team this past Monday. Does anyone here know what team I am talking about? Iceland!  Yes, you heard right, the Icelandic team so far has been undefeated in this tournament. And we will see if they will be able to continue their winning streak, they actually will take on France in about 35 minutes. But regardless of what will happen later today, the fact that Icelnad has advanced to the quarter finals is already an amazing accomplishment.

And for those of you unfamiliar with the European soccer scene, the Icelandic team is not among those dominating soccer nations in Europe. This European championship is the first international tournament they compete in, although they almost qualified for the World Cup in 2014. Now it has been pointed out again and again that the population of Iceland is tiny. Iceland has about 333,000 inhabitants, which is about half the population of the City of San Francisco, and consequently not a great pool of people to pick talented soccer players from. Iceland doesn’t have its own major soccer league. Iceland doesn’t even have a climate that allows year-round outdoor soccer – it’s called Iceland for a reason. So talk about overcoming a multitude of obstacles. This team is the ultimate underdog. It’s a Cinderella story. It’s a miracle.

So what does this Icelandic team do right? They are unafraid. They work hard and with determination. They don’t give up. The players always seem to be at the right place at the right time. And: they work together. They are truly a team. Iceland is one of the few international teams that don’t have a star, a stand-out player. And: they have a great coach, someone who has been able to shape these individual players with their talents into a unified force to be reckoned with. And needless to say, the entire population of Iceland, all 333,000 of them, enthusiastically supports their team. So maybe it’s not such a miracle after all.

And how refreshing it is to see the fruits of people working together and standing united, even though it’s only a soccer team; especially in a day and age when we experience more and more division, mistrust, separation, and this stubborn individualism of people and of nations – we don’t need anybody – Brexit is an example, but we find such tendencies in countries like Germany or the U.S. as well.

A house that is divided against itself will fall, Jesus says, and St. Paul adds: but if we are of one mind and in one Spirit, following the same goal, miracles can and will happen.

The story we hear in today’s gospel always tempts me to feel discouraged and to wallow in self-pity. The harvest is plentiful, but the laborers are few. Ah yes. Jesus sends out 70 disciples, two by two, and they are not always welcome, but experience rejection along the way. Oh, yes. They are like lambs among the wolves. Can’t we sympathize with them, because we often feel vulnerable as followers of Christ in an indifferent and corrupt world?  We know what the obstacles are as we proclaim the good news of Jesus Christ.

And even the notion that those 70 return, rejoicing that they were able to perform miracles in Jesus’ name, makes me want to say: but that was then, and now is now, and the times have changed so much, and there are fewer and fewer people who are even open to hearing the good news of Jesus Christ, who died and rose so that all creation may have new life. How do we harvest those folks who are reluctant or even unwilling to be gathered in, those, who just don’t see the point of following Christ in this day and age?

It may be good news that so many were touched by those 70 preaching and healing in Jesus’ name, but how is it gospel, good news, for us and for the world today?

Now there have been many ideas about what this kingdom of God might be. One popular interpretation has been that the kingdom of God, since it is not of this world, as Jesus says, must be heaven, a place we reach after we die. But this is not what Jesus is talking about. Jesus juxtaposes the kingdom of heaven to earthly kingdoms, and especially the Roman Empire. Jesus points out over and over that this kingdom grows among the people, like a weed, and spreads quietly, like leaven in a dough. Jesus describes this kingdom as a realm where peace and justice reign. Jesus talks about this kingdom as an environment where we love our neighbor and care for the neighbor.

In short, it is a realm unlike any other we find here on earth. Division, strife, and mistrust are not modern phenomena. There has always been the great divide between rich and poor, those in power and those who are powerless. There always has been exploitation of the weak. There have always been those hungry for power and using all means to get or keep that power. There has always been cruelty and war, and fear and terror has led many to even betray their neighbors.

God’s kingdom is the total opposite of the world we live in. And God works to transform this world and make it a new creation. But, as Jesus also point out, this is not something that will happen miraculously. No, we have part in this. We are sent out today, like those 70 back then.  And if we are not giving God’s kingdom room to grow, in our hearts and our world, we will experience more of the same old – same old. Love God, love your neighbor, says Jesus. This is the starting point. With this love, which is not just a romantic feeling, but a concerted effort, the world can be transformed. The kingdom of God has come near to you!

And the kingdom of God is still near to us today. Among all the bad news we receive each and every day – like this past week the news of yet new terror attacks in Istanbul, Dhaka and Baghdad – among all the events of violence and injustice and hate, we see glimpses of the kingdom of God: people showing mercy in the midst of mayhem. People hoping and acting against all hope. People standing up for their neighbor. People caring for the neighbor they might not even know. People loving God and their neighbor, even though the world tells them to do otherwise.

I know what it feels like to be overwhelmed with all the evil happening in this world today. I know what it feels like to be daunted and discouraged. As those who love, we are the underdog in this world. But: the underdog has a chance. If we are unafraid. If we work hard and with determination. If we don’t give up. If we work together, overcoming our egos and our pride. If we keep our eyes open and show up at the right place at the right time. And if we let Christ shape us with our individual talents into a force of love to be reckoned with. If we are of one mind, in one spirit, following the same goal of transforming the world, miracles can and will happen. In all that, we can be confident, for: the kingdom of God has come near to us. Christ is with us. 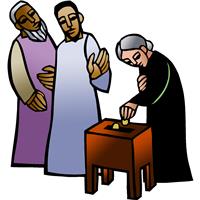