August 2019 marks the 400th anniversary of the beginning of slave trade in the British Colonies on the American continent. In 1619, 20+ African slaves were brought by a Dutch ‘privateer’ – basically a pirate who was hired by kings or queens as a mercenary – to Jamestown in Virginia.

These slaves originally were not destined to come to North America; they had been taken captive by Portuguese forces in Angola, which back then was a Portuguese colony, and were on their way to the Spanish colony of Veracruz, when the ship, the cargo, and the Angolans on board were seized by said privateer. One could say that the first people to be sold into slavery in the British colonies on the North American continent arrived there quite by accident – but this event then started an extensive slave trade. An estimated 600,000 human beings from Africa – men, women and children – were sold to North America. And during the 1840 U.S. census, more than 3.2 million slaves were counted. Slavery for the most part was hereditary.

Now it has been pointed out that 1619 doesn’t mark the beginning of slave trade on the American continent – the Spanish and the Portuguese had been bringing African slaves to South America, the Caribbean and the southern part of the North American continent since the early 1500s – but the events from 1619 definitely were a turning point. The Brits had licked blood, so to speak, and saw the advantages of brining free labor to the developing colonies. Slavery in the British colonies was turned into a legalized institution after 1660, when King Charles II of England founded the British African Company, and slaves now where traded to the British colonies in vast numbers. This institution was only outlawed with the end of the Civil War in 1865.

However, end of slavery in the American South did not mean true liberation of African American people. The white man developed new strategies to keep African Americans in bondage – and we feel the repercussions to the present day.

Now I assume we all have seen images or movies about slavery, like ‘Roots’ or ‘Twelve years a slave’. We have read stories about the horrors of it. Human beings were dehumanized, traded as a commodity, and treated worse than animals.

Long before cotton, tobacco and sugar cane production were booming there. The growing and harvesting of sugarcane was especially dangerous for those laboring in the fields, since the process involved burning and smoke. The average span a slave worked in the sugarcane fields was just 7 years…

The English poet William Cowper penned a telling line about slaves: ‘I pity them greatly, but I must be mum, for what would we do without sugar and rum?’

We can still see the shackles with which slaves were tied down and bound, chains that caused those people from standing up straight, when we go to museums dealing with that history. What is especially shameful about this is that slave owners – and the clergy ministering to them – used the Bible to justify slavery, and the inhumane treatment of slaves. It was implied that this was an expression of God’s order and will.

It is quite astounding that those people who were used and abused as slaves with the supposed blessing of the Bible were not put off by this cruel religion. No, something strange and amazing happened: as the slaves heard stories from the Bible, like the story of how the people of Israel were slaves in Egypt, and the stories of Jesus, they embraced Christianity with enormous passion and longing. And they made them their own. They understood the God of the Bible, and especially Jesus Christ, as a liberating force, a force to set them free – from any bondage. They knew that God has the power to redeem them and take them from this vale of tears into the glorious kingdom of God where they are free at last.

Nowhere do we experience their faith and theology more than in those songs we call spirituals. Whoever was here this year or last year for the Good Friday service will remember A W, who both times gave us goosebumps as he sang ‘Were you there when they crucified my Lord?’ Why is this spiritual so powerful? Because African Americans always have been able to identify with the reviled, tortured and executed Savior. ‘Were you there when they nailed him to the tree?’ Oh, they were there and witnessed the crimes committed against their own – their brothers and sisters who bear the image of the Lord.

There are plenty of spirituals about the longing for the heavenly home, songs where ‘crossing the Jordan’ is code for entering the Promised Land, heaven. And there are exuberant songs talking about how God liberates his people. These are the songs we typically think of when we hear the term ‘spirituals’, those songs with swinging rhythm and clapping on two and lots of ‘hallelujahs’. And we will sing one of those songs, ‘I’m so glad Jesus lifted me’, in just a few moments.

In today’s gospel, we encounter this God the spirituals talk about, who came not to bind and to enslave, but to set people free.

Jesus is teaching in a synagogue on the Sabbath Day. A woman, who has been crippled by a weak spirit and bent over for 18 long years, enters the synagogue. From the description, we can’t tell if she is bent over in a physical sense, or if she is weighed down by grief, depression, trauma, addiction, or some other mental ailment.

Maybe she has lived in quite oppressive circumstances for 18 years, maybe she has been bound by the will of someone else – like an abusive husband or a controlling mother-in-law. Maybe her dignity has been taken away from her, and that’s why she is crumpled in on herself, unable to stand up straight. We don’t know. There are so many ways women in Jesus’ days – and often in our day and age as well – can be bound and bent and have to bear the weight of oppressive systems.

And we probably all know, there are many ways to feel crippled and weighed down and bound and shackled.

No matter what her predicament, since the woman is bent over, crumpled into herself one way or another, she is most likely not able to truly see what’s going on around her. Her perspective is limited by her condition. However, Jesus sees HER. And the moment he sees her, he stops in his tracks, he interrupts what he is doing and calls her over.

That alone probably raises some eyebrows – why would Jesus interrupt this important business of teaching and pay attention to this nameless woman, this nobody? Why does he pay more attention to her than all those learned folks who have come to listen and engage in weighty discussions about God? But Jesus is about to teach them the most powerful lesson about the kingdom of God – and his own purpose. It’s a lesson much more powerful than words.

Jesus sees the woman. He sees her condition. He understands what is going on with her, what is binding her, what is keeping her down. He talks to her and speaks the words she maybe has longed to hear for 18 years, ‘Woman, you are set free from your ailment.’ Or, as the original Greek here says, ‘You are untied, you are unbound from that, which ails you. The bonds are loosened. You are free.’ And as he engages her, touches her, treats her like a human being, she immediately stands up straight. The weight is lifted off her. She has been freed.

Jesus sees her, sees her as a child of God in desperate need of healing. Maybe this is the first time in 18 years someone has treated her that way: with dignity. With mercy. With love. And as soon as she feels how the weight is lifted off her, the women praises God.

Now on one side we have the praises and the exuberance of this liberated woman – on the other side the indignation of the leader of the synagogue that someone was healed on the Sabbath Day, a day no work ought to be performed. He is a champion for God’s holy laws, there needs to be rules and order, after all!

This synagogue leader seemingly is not even attacking Jesus himself, but scolds the crowds, ‘There are six days on which work ought to be done, six days to be healed – don’t come on the Sabbath Day for that, come back on one of those other days!’ But, of course we sense that by doing that, he is attacking Jesus as well – how dare you! And what I find very interesting is that we have another kind of bondage that is going on here: the synagogue leader is bound and shackled by the law – it is the thing that keeps him from standing up straight and limits his perspective. He just can’t see the need of the woman and experience this mighty deed of God that is happening, right there in front of his eyes.

Jesus not only sees the bondage of the woman, but the bondage of the leader of the synagogue as well, and teaches him and all the zealous and controlling keepers of the law, those who are shackled by a rigid interpretation of the law, a lesson: mercy comes first.  God’s law is a gift that helps people live a life in harmony with God and with one another – not some repressive catalogue of strict rules and regulations. And God’s law of love is above them all – the Bible and Jesus tell us so!

God is not about binding people or keeping them in bondage – this is Satan’s prerogative – no, God is about setting people free. Free to stand up straight. Free to have a broad perspective and to see their neighbor. Free to love and serve God and neighbor. God is about setting us free from sin and death, so that we may have life and live it to the fullest – together, in communion with God, with one another and with all of creation. Thanks be to God, hallelujah!

Institutionalized slavery may be a thing of the past in our time and the part of the world we live in. But we all know that still people are held captive against their will. Human trafficking, especially when it comes to women and children, is much more rampant than we think. Undocumented workers are taken advantage of by unscrupulous employers. In this country, there is a whole prison industry that has an interest in keeping the prison population – and most of the people in the system happen to be people of color – high, since there is a huge profit margin in that. People crossing the border, among them very young children, are held like animals – or worse – in cages, without adequate food, hygiene or sleep. And, again, there are people who make really good money off that.

On the other hand, there are all those who are bound and shackled by greed and the lust for power so that they are quite unable to stand up straight and see the humanity and the face of Christ in their neighbor. And sometimes it is the bondage of convenience, of which most of us are guilty. ‘I pity them greatly, but I must be mum, for what would we do without cheap clothing made by children in sweatshops all over the world or inexpensive produce harvested by undocumented and exploited workers in our fields?

Satan is still doing their thing in this world today. 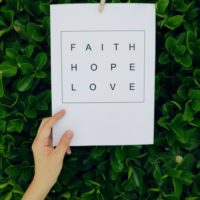