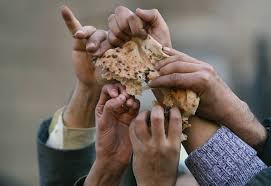 Jesus feeds the 5,000. It’s an amazing story, a marvelous miracle. And I know there are quite a few who interpret this story in an allegorical sense: that Jesus stills some spiritual hunger that people have, that we have today. And that this story has not much to do with actual bread or fish, food we get our teeth into, food that we taste and savor and swallow, food that fills our stomachs, but rather with the living bread from heaven, Christ himself, who has offered himself for the sake of the world to satisfy our every need and desire.

I don’t want to debate this interpretation of the story; but I would argue that it is the privilege of those with full stomachs to interpret the feeding of the 5,000 in that way. What about those who actually go hungry, maybe even to the point of starvation?

I am part of a very lucky generation that doesn’t know real hunger, but prosperity and supermarkets filled to the brim. I am part of a generation that also may not appreciate the food we have enough, a generation that is used to being wasteful with food. But I know that there are some here who, as those who lived through a war and as refugees, know what it is like to go without adequate food for days or weeks or months. Those who learned to be creative in their use of limited foodstuff. And how hard it is to have the energy to make it through another day, how hard it is to focus on anything, when you are starving.

A fast can be good and cleansing for the body and the soul, but a prolonged involuntary deprivation of food is devastating.

Jesus may have said as he was tempted by Satan in the desert that ‘one doesn’t live by bread alone, but by every living word that comes from the mouth of God.’ However, Jesus knows about the necessity of the basics of food when he even makes it a central petition in the prayer we call the Lord’s Prayer: ‘and give us this day or daily bread’. He knowa that life, and especially life to the fullest, is impossible without our daily bread. Jesus knows about real, physical hunger.

And, as we all know, there is still hunger in this world, yes, even in our own community, today. You just have to walk the streets of San Francisco to see people asking for money for food.

And while in this country we are distracted by all the shenanigans in Washington, and focus on our own needs and wants, there are currently 20 Million people at risk of starvation in Central Africa alone, mostly in the nations of Somalia, Yemen, South Sudan and Nigeria, according to the United Nations. We see images of war-torn Syria, but forget that the ongoing conflict there has caused a famine for millions of people. The U.N. calls this the worst humanitarian crisis since 1945. Did you even hear about it?

It seems we – and the media – have become callous toward the suffering of others.

Another thing I realized reading up on the hunger crisis in this world: the media have adopted a new word for hunger which first came out of the UN’s Food and Agricultural Organization: food insecurity.  Now isn’t that a word the late George Carlin could have had fun with?  Food insecurity.  Makes you think that things are not so bad after all, right, we’re a little insecure as to whether we will have something to eat tomorrow, but it isn’t so dramatic. Language is so powerful. And what happens is, that somehow the whole issue of hunger becomes depersonalized, sterile, and that we become somewhat detached. Sounds very much like a term bureaucrats came up with.

But hunger is real, and hunger is desperate. The most tragic aspect of growing hunger in Africa and around the world: there is no happy ending in sight.  Day by day, more and more people are added to the list of the malnourished.  Urgent appeals for help from the United Nations and aid organizations go unheard.  Apparently people in wealthier countries are too preoccupied with their own insecurities and worries as if they could respond to pleas for help.

Many different organizations, like Bread for the World, UNICEF, Doctors Without Borders and Lutheran World Relief, to name just a few, have tried to feed the hungry.  But they only can distribute as much as they receive. And it seems that, again, we need a feeding miracle here, the miraculous multiplication of bread and fish and baby formula so that everybody would have their fill.  And we pray: God, provide those people with food, stop their drought, kill the locusts, bring peace to war torn nations, give them today their daily bread.  Work a miracle as you have done before, back when you fed the 5,000.

But what happened back then, in the wilderness?  Flocks of people, all hungry for healing and a word of comfort and encouragement, follow Jesus into the wilderness.  And as the day comes to its end, Jesus’ disciples are increasingly concerned with “what are all these people going to have for dinner?” At some point they bring it to Jesus’ attention that it’s getting late, and the people sure must be hungry. And their solution to this dilemma?  Call it a day and send everyone home. We can’t solve this problem, there are just too many of them, so let’s send them away, Jesus.  But Jesus has something else in mind: YOU feed them.

But Jesus, we have only five loaves of bread and two fish, barely enough for ourselves.  How are we supposed to do it?  And Jesus says, just bring it here.  And Jesus takes the five loaves and two fish and looks up to heaven, and blesses, brakes, and gives the loaves to the disciples.  And the disciples distribute them among the crowds.  And they all eat and are satisfied.

We can’t explain how this miracle happens.  I think that one of the miracles is that the disciples trust Jesus and do as he says, sharing the little they have with the ones in need. Another miracle: the crowds are transformed into a true community, passing on and sharing what they are given by the disciples, thus feeding everyone.

Can such a miracle occur today?  The Dalai Lama once gave a lecture, and in the following question and answer time, someone asked the holy man if he had any recommendations to offer regarding the alleviation of world hunger. As the audience settled in for what they expected to be a long and complex response, the Dalai paused, and replied….”Sharing.” Jesus said, “You give them something to eat!”

Maybe we pray and wait for a miracle and don’t see that it has already occurred.  Imagine being a child from a developing country, entering a regular sized U.S. American supermarket.  Wouldn’t it seem like a miracle to you, to see the shelves loaded with this overabundance of food?  And I know that life has gotten harder for many in this country, that many have to cut back on costs, that hunger is on the rise.  But overall, we will have to admit that we are doing very well here, compared to the many places in this world where more than fifty percent of the respective populations suffer from food insecurity.

And I am aware that just sending food can’t be the solution, that people in places like Sub-Saharan Africa and Syria need peace to prosper, and once there is peace, they need the technology to drill for water, they need seed they can plant, they need know-how how to make the most of their limited resources. But before people can grow their own food and take care of themselves, they need to be fed first.

The miracle we may be asking for already has occurred.  Not only in the things we like to call blessings which we have received – but the greatest miracle being that Jesus shared, gave himself for us.  Not asking if we are deserving, but because God knows we need it. And I believe that, just like the food in the wilderness was given indiscriminately, Christ offers himself indiscriminately, too. That’s called grace.

So WWJD?  What would Jesus do concerning the starving people in Somalia and other places in this world?  What would he do if we came up to him in our prayers, Jesus, those folks are hungry, do something?  Well, I think you can guess the answer.  Jesus would probably say: YOU feed them.  You have been given everything you need, and more than that.  Now the question is: does the miracle occur again, that we truly trust Jesus and listen to him?  Does the miracle happen again that we are transformed into a caring community that tries to embrace as many of God’s children and share with as many as possible?

God only knows. But in the meantime, may our prayer be that we become co-conspirators of God and help God make miracles happen in this world today – for the daily bread of all. 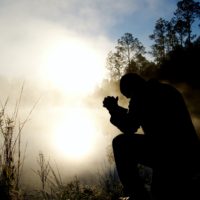