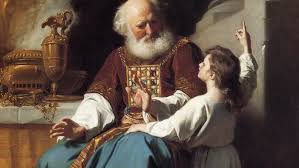 The Bible is full of interesting and multi-layered characters. The vast majority of them are not perfect – they are all human, after all, so why would they be? And wouldn’t perfection be boring? At least when it comes to storytelling?

I am grabbed by one of the characters of our lesson from the Old Testament today, from the 1. Book of Samuel. We heard the quite well known story of the calling of the boy Samuel, the chosen one of God, who eventually will become a prophet and the last of the judges of Israel before the institution of the monarchy. And Samuel definitely is a very interesting character – a true human hero with his share of weaknesses.

But today I want to focus on the man who plays an important supporting role in Samuel’s story: Eli.

Eli is a classical tragic figure. He is the high priest in the sanctuary at Shiloh – these are the days before Jerusalem is conquered by David. Eli is not only the spiritual leader of the tribes of Israel – he is also their political leader, their ‘judge’, as the Bible calls it – though that title is somewhat misleading. A better title probably would be chieftain.

Eli is a good leader – he rules for 40 years, and until toward the end of his reign, there is peace and prosperity in the territory of the 12 tribes of Israel. However, his two sons, heirs presumptive, take advantage of their privilege and their position and go rogue. They bully those bringing sacrifices to the sanctuary to give them the choice pieces of the meats for their own consumption – even though those choice pieces are meant to be sacrificed to God. They also abused their power by coercing the women who served at the entrance to the sanctuary into having sex with them. Today we would call this sexual abuse, ‘abuse of power’, and any number of things.

Eli hears about it and even scolds his sons, though kind of half-heartedly.  The sons continue to do as they please. And Eli? Basically turns a blind eye to the misdeeds of his sons. What can you do, eh? Boys will be boys…

But God is not pleased with the situation. And that’s where Samuel comes in. The first thing young Samuel is commanded to do by God after the scene we heard about in today’s lesson  is to tell Eli that God will make an end to Eli’s house and family –and that his dynasty will end. And, not surprisingly, Samuel is very reluctant to relate this message to his mentor. But Eli, the conflicted man of God, just sighs, ‘It is the Lord; let him do what seems good to him.’

Now Eli turning a blind eye to the corruption his sons are involved in is not his only error in judgment. Years after young Samuel receives God’s call in the night, and Eli is an old and almost blind man, the tribes of Israel are once more entangled in battles with the neighboring tribe of the Philistines – the perennial enemy of Israel. The Israelites suffer a major defeat.

The elders of Israel are clueless as to why God doesn’t grant them victory. And they decide to bring their secret weapon into battle: the Ark of the Covenant, the holiest artifact of Israel, which contains the stone tablets with the Ten Commandments Moses received on Mount Sinai. It was also believed that God God’s self was present in the Ark. And with God present in battle, surely they’d win.

Eli, who is in charge of the Ark, hands it over gladly, confident that victory will be theirs. Moreover, his two sons are to be the keepers of the Ark in battle – someone has to carry it, after all. And the presence of the Ark raises the morale among the troops of the Israelites. They throw themselves into battle with new vigor.

Well, the Philistines are not deterred. They fight back, capture the Ark, and kill Eli’s sons. The army of the tribes of Israel is destroyed.  When Eli hears about it back in Shiloh, he falls over backward and breaks his neck. His dynasty is finished. God’s prophecies are fulfilled.

And under these difficult circumstances – Israel defeated, the Ark – and God – kidnapped by the Philistines – Samuel assumes the responsibility of leading the tribes of Israel. But that’s another story.

Back to Eli for a moment. He wasn’t a bad guy – in the sense of actively doing bad things. But of course we know that he, by turning a blind eye to his sons’ corruption and by not interfering, becomes complicit. He also shows poor judgment to send his men back into battle against a superior Philistine army, naively thinking that, as long as God is present in battle, God must be on Israel’s side and lead the army to victory – against all odds.

Eli will always be remembered for his failures, and not for his 40 years of overall good leadership. Isn’t it tragic?

Our beliefs, our values, our view of things inform our view of the truth. Our preconceptions are like a pair of glasses through which we look at the world around us. We all have a unique perspective of things and see things a certain way. And: we all have our prejudices. We all have our blind spots. We all tend to be a little naïve when it comes to certain ideas. No one is able to look at things in a truly objective way. We are human, after all.

Especially over the last few years, there also have been so many lies, so many twisted truths, hair raising conspiracy theories, even the introduction of ‘alternative facts’ that were meant to mislead people and give them some alternative reality to believe in that has nothing to do with the world we live in. Last week’s events on Capitol Hill demonstrated how dangerous it can be when people see what they want to see and believe what they want to believe.

There is this little cartoon by British artist Martin Shovel – and you can easily look it up on Google under ‘Martin Shovel truth’ – which pretty much summarizes where we are at: in the 1st panel, the French 17th century philosopher Rene Descartes utters his most famous line, ‘I think therefore I am’ under the heading ‘Truth’. In the 2nd panel, a present day man, under the heading ‘Post Truth’, says, ‘I believe therefore I’m right’.

We have to be careful. We are not always right. Truth sometimes is put together by many facets and pieces. And we can’t assume that our perspective is the only one. We have to look at things, sometimes from different angles.

What do we hear in today’s gospel lesson from John, when the first disciples start to follow Jesus and don’t quite know what to make of this carpenter from the forsaken backwater Nazareth in Galilee? Jesus says, ‘Come and see.’ Come and see. Check it out, check me out, find out for yourselves. It is an invitation, not an order.

And if you think about it, all the gospel stories about Jesus reflect this ‘come and see’, as Jesus clearly shows who he is – healing, teaching, connecting with people. And most clearly we see who Jesus is as we look at the cross. God is revealed. Come and see.

Jesus knows that a blind faith in him would be useless, even dangerous – because blindness more often than not leads to self-righteous fanaticism. Jesus wants his disciples, Jesus wants us, to see – and then make an informed decision to believe. That’s why discernment plays such a big part in our faith. That’s why constant discernment as we go about our lives in Christ is so important.

But in order to confess, we have to have the courage to see – see how we fall short, see how we are complicit by our silence or ignorance. And may God give us all this courage. In times like these – and always.