The stained glass window above the altar, depicting the resurrection of Christ, was given to St. Matthew’s by Helene Strybing, née Jordan (1845-1926), a clergyman’s daughter who grew up in Römstedt near Bad Bevensen, Germany. She donated the window in memory of her deceased husband, Christian Strybing [Strübing] (1821-1895). He was born in Gnoien in Mecklenburg and arrived in California in 1849. In San Francisco he went from being a grocer to becoming an importer, merchant, and entrepreneur. San Franciscans may remember Helene Strybing for bequeathing the funds for the Strybing Arboretum in Golden Gate Park in her will.

In addition to the excellent acoustics of St. Matthew’s, which make it an ideal venue for vocal and instrument performance, St. Matthew’s is famous for its stained glass windows which commemorate many of the early settlers in

San Francisco. One such window to the right of the pulpit, showing Jesus ministering to a pair of small children, was bestowed by Henry (1834-1915) and Katharine (1853-1943) Ohlandt, one of the founding member families of the church, likely as a sign of thankfulness for God’s blessings. Henry Ohlandt arrived in 1852, starting out as a grocer. He and his brothers then made a fortune with their National Ice & Cold Storage Company, which in the days before refrigeration was of great importance. Later, Ohlandt rose further in prominence as a shareholder in the German Savings and Loan Society and participating in the Hawaiian sugar trade.

Other immigrants experienced both success and misfortune. Andreas Himmelmann (1828-1881), whose wife Katharine is memorialized in one window, was born in Kassel, Germany, came to California in 1849. At one time he was fairly wealthy but suffered severe setbacks later on.

Still another window honors the immigrant Albrecht Kuner (1819-1906), whose daughter Martha (1863-1941) was married to Pastor Gehrcke. An engraver by profession and a native of Lindau on Lake Constance, Kuner arrived in the eventful year of 1849, a few months short of his thirtieth birthday. By his own account, he left his homeland because of the economic downturn resulting from the political upheavals of 1848-1849. Mr. Kuner designed the first gold coins minted in San Francisco, and he made the dies for the medals of the Mechanics’ Institute, and did the engravings for the seals of Wells Fargo Bank between 1852 until his death in January 1906. He also made the first engraving of the Seal of the State of California.

More photos and history of the windows: 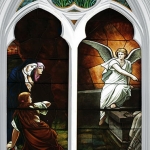 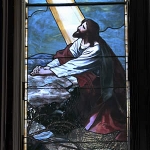 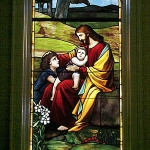 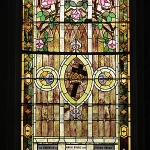 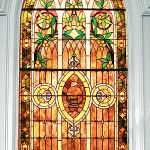