When they had come near Jerusalem and had reached Bethphage, at the Mount of Olives, Jesus sent two disciples, saying to them, “Go into the village ahead of you, and immediately you will find a donkey tied, and a colt with her; untie them and bring them to me. If anyone says anything to you, just say this, ‘The Lord needs them.’ And he will send them immediately.” This took place to fulfill what had been spoken through the prophet, saying,

“Tell the daughter of Zion,

Look, your king is coming to you, humble, and mounted on a donkey, and on a colt, the foal of a donkey.”

“Hosanna to the Son of David!

Blessed is the one who comes

in the name of the Lord!

Hosanna in the highest heaven!”

When [Jesus] entered Jerusalem, the whole city was in turmoil, asking, “Who is this?” The crowds were saying, “This is the prophet Jesus from Nazareth in Galilee.”

Firstly thanks to you and to your pastor and mine, Kerstin Weidmann, who is also my wife, for inviting me to be with you on Palm Sunday.  I am happy to be with you at St. Matthew even as in this moment I am here in my church, Hillcrest Congregational Church United Church of Christ in Pleasant Hill, preaching from this beautiful sanctuary on this Palm Sunday.  I do look forward to the next I can visit and be with you in person in the beautiful sanctuary of St. Matthew’s Lutheran church on the corner of 16th and Delores in San Francisco.

This Palm Sunday  Gospel reading raises lots and lots of questions and includes so much—so much that no one sermon or even 10 sermons could get at—but one thing I want to raise for us on this Palm Sunday 2021 comes from the first sentence, and even just from the first part of the first sentence of this great Gospel lesson:  When they had come near Jerusalem and had reached Bethphage, at the Mount of Olives…

Jerusalem, Bethpage and the mount of olives. Wow.  What does just hearing those place names conjure up for you?—from bible study, or hearing sermons, talking to others, from the movies, etc. Take a moment. Well, among the things they conjure up is King David and his own exile from Jerusalem during a time which we might call civil war, or (even closer to our times) insurrection. During a kind of storming of the capital, he fled the city. And when he came back he followed a route very similar to, if not exactly that which, Jesus followed to get to Jerusalem—from the Jordan river, and even the other side of the Jordan river, thru Jericho, and up to the Mount of Olives and through Bethpage.

So, what does that route suggest when Jesus takes it? Well, exile and separation as David experienced it for sure. How sad and challenging and painful it is that this “Son of David”—that’s literally what they call Jesus in the story—not only has to experience a similar sense of exile and separation that the great King David did BUT, BUT is knowingly entering a city which is not under the control of it’s own people from of an outside imperial power, which at best only tolerates Jesus’ own people and at worst, as we know, is prepared to execute him. I mean I like Palm Sunday, it’s fun and exciting, but…but.

Now here’s the other thing about that route that Jesus takes to get to Jerusalem. What about the other side, the far side, of the Jordan. Then as now, those are different people over there. Different from on this side of the Jordan. Different from us—sorta thing. And even when on THIS side of the Jordan, Jesus is so often reaching out to others NOT LIKE US, we might say—Samaritans, Canaanites, different religious sects among his own peoples. It’d be like in our times making a point of reaching out to—I don’t know, name your groups who are either different or  under attack or whose very name even brings some sense of threat to others—Asians, Mexicans, Muslims, Republicans, Democrats, folks with aids, folks with Covid-19.  Even the very route Jesus takes to get to Jerusalem for that Palm Sunday procession, let alone all he did along that route and throughout his ministry tells us—he was reaching out. He was reaching out to heal, and to make whole. To heal and to make whole individual people, and whole communities, and groups and his nation.

And Snapshot #2—Here it is:

It says, “If you think religion is what you do in a sanctuary, and not on the street, you’re doing it wrong. Signed, Every Prophet in the Bible”

Certainly the Palm Sunday, for all its action out there in the street or on the path down from the Mt. of Olives to the city of Jerusalem suggests that Jesus would sign onto that statement along with the biblical prophets. If the Palm Sunday entry into Jerusalem isn’t doing religion “on the street” –then I don’t know what is.

Of course, Jesus’ got nothing against “in here” either—Jesus regularly attended synagogue. Weekly, the bible and our Gospels make that clear. He taught in congregations and he worshipped in congregations. So if Jesus were gonna quibble with this quote at all, I imagine it would be with that false separation of sanctuary and street. Jesus and the bible and our faith don’t separate those.

What we do in worship together and for our own selves, what opening ourselves up to God and each other does to us and for us, what God’s Holy Spirit does to and for us, is to heal us, to make us whole, to nourish and nurture us. God call us IN for healing and wholeness And God calls us to do the same for others—individuals and groups AND the whole community OUT THERE.

Just think of the sick, twisted videos we’ve seen lately—people attacking other people and knocking to the ground others, often elderly others, who they consider other, different, bad, unclean, whatever it is. Whatever it is it’s sick. Evidence of a sickness in the perpetrator AND in our society which harbors and nurtures such hate and separation. NO.

And that’s among the reasons why Jesus, and God, calls us in—to sanctuary, to worship. Call us to open ourselves to God and each other, all of which, quite literally, serves as a sanctuary from the evil, destructive, negative energy that drives so many in our world and drives what they do to others, AND to themselves, as they go deeper down these paths of hate and separation—God and Jesus call us in, to worship, to pray, to meditate, to reflect, to find sanctuary. AND THEN

Jesus and God call us out again…to live out and to model and to grow in living out life within God’s kingdom. We pray it:  Thy kingdom come; let your kingdom come—AND we live it and show it—out there, in what we do.  That’s snapshot #2.

Snapshot #3 and our final snapshot on this Palm Sunday– as we enter into the holiest AND darkest time of the year for us Christians.  See this quote from writer and psychoanalyst Jeremiah Moss, quoted in a recent New York Times called “What does Home Mean to Us” about the ravages of the pandemic on all of us and on some of us more than others, and what that has done to our very notions of who we are and what our homes are. Moss writes:

Tragedy breaks us out of the status quo, wakes us up, and in that wakefulness we can be more humane.  JEREMIAH MOSS

Isn’t that what Jesus shows with every step he takes along the street, along his journey to Jerusalem, in his time in Jerusalem interacting with regular people, with religions leaders, and with government officers, even in that darkest and yes holiest of times as he is being tried—if you want to call it a trial—and executed:

“Tragedy breaks us out of the status quo, wakes us up, and in that wakefulness we can be more humane”

Well, we cannot be more humane than Jesus—but we can and do follow Jesus’ lead and respond to his call to practice our own humanity, beginning by recognizing and responding to the humanity in others.

Among the many mysteries wrapped up in the core mystery of the Christian faith—that the divine has become human—is that to be fully human, as Jesus is, is to be divine—that is our faith in a sentence. And in a sentence, it IS how to live, how to live as one who is holy and whole, and how to effect others and whole communities to experience holiness and wholeness for themselves.

It’s who Jesus is. It’s who we are, and who and what we are called to be.

My sisters and brothers of St. Matthew’s, as we walk through Holy Week and as we move through our lives, let us take these snapshots with us, and share them with others, in all we do.

And let everybody say together…AMEN. 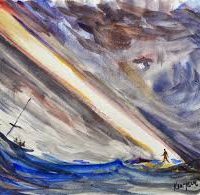