It’s been 15 years now that a book by Dan Brown was a smash sensation. Do you remember this book? It is the ‘Da Vinci Code’. Has anyone here ever read it?

I have to admit that I gobbled it up. I like good stories, and this IS a good story – and Dan Brown in my opinion is a very good story teller.

There was a movie based on the book a few years later, with Tom Hanks playing the role of the protagonist, scientist Robert Langdon. And the synapsis, or maybe better, the sensationalist teaser for the movie, is as follows:

‘A murder in Paris’ Louvre Museum and cryptic clues in some of Leonardo da Vinci’s most famous paintings lead to the discovery of a religious mystery. For 2,000 years a secret society closely guards information that — should it come to light — could rock the very foundations of Christianity.’

The premise of the book is that there is some secret society, of which Da Vinci was a member, who have guarded the secret of the Holy Grail, which actually is interpreted as the sacred bloodline of Jesus Christ – and Mary Magdalene. Which means the two had children together. Did it rock Christianity? I don’t think so.

And there is no evidence whatsoever that this is the case – but Brown’s book is actually based on so-called ‘research’ by folks who saw clues about this union between Jesus and Mary in early Christian writings that did not make it into the Bible – because they are very obscure -, art, folklore and myths.

Now part of Brown’s book is also the conspiracy theory that the Vatican wants to keep the relationship between Jesus and Mary a secret – and that, from early on, the church fathers started a smear campaign against Mary, denying her the honor and adoration she deserves.

Now I am not so sure about an intentional smear campaign, but I have to say that the image of Mary changed quite dramatically from the stories we have in the gospel accounts to the idea of Mary that many still have today – and early church fathers definitely played a role in that: Mary, the sinner.  Mary, the prostitute. Mary, the sensual temptress.  Mary, the adulteress.  Mary, the redhead. Just google pictures of Mary Magdalene, and that’s what you will find. This is how Mary predominately has been represented in art.

Who doesn’t have those attributes in mind when he or she thinks of Mary, called Magdalene?  Be honest!

It’s funny how certain things just stick.  Mary Magdalene’s reputation as the personification of sins of the flesh is an urban legend which has stubbornly lasted through the centuries.

But the gospels don’t mention anything about Mary being a prostitute, an adulteress, or a sensual redhead.  According to the gospel stories we have in the Bible, Mary Magdalene is present under the cross and on the morning of the resurrection. Other than that, her name is mentioned only once: in Luke, chapter 8, where Luke lists some of the woman followers of Jesus who support him financially– among them ‘Mary Magdalene, from whom seven demons had gone out’. By the way, this could describe any mental illness and has nothing to do with Mary’s supposed promiscuity.

There are a couple of anonymous women, like the sinner who anoints Jesus’ feet with oil and the woman who is caught in adultery, who have been linked to Mary – but all we have here are assumptions; it is very unlikely that these women can be identified with Mary.

Mary has been slandered, for sure; and it’s hard to shake off her image as the temptress, the prostitute, the sinner. These are the descriptions, the names that are still widely attributed to her today. So let me make a case for Mary, the faithful and steadfast witness, and pay attention to her name as we actually read it in the Bible.

And I am not just referring to the name “Mary”, which in Hebrew means something like “she who cries” or “the bitter one”.  Many women in Jesus’ days were given that name, we hear about several Marys in the gospels.  I am referring to the name that was given to Mary, possibly to distinguish her from all the other Marys: Magdalene.

Today we often think that the name “Magdalene” is just another female name and must have been something like Mary’s middle name.  But actually Magdalene could mean two things: first, “from Magdala”.  Today we don’t have any hints where a town of such a name could have been, there are speculations that it could have been a town on the shores of Lake Galilee – but there is no real archeological evidence for that.  But other scholars point out that the Hebrew word “Migdal” , from which ‘Magdalene’ is derived, means “tower” or stronghold.  According to their research, Mary Magdalene means: Mary, the tower – Mary, a mighty fortress.

Mary, then, was given this honorable name at some point, just as Simon was called Peter, the rock – we heard all about that in our two last Bible studies, didn’t we?  Simon, the rock – Mary, the tower – sounds very convincing, doesn’t it?  It seems absolutely possible that Jesus did not only bestow an honorable name on Simon, but on his faithful follower and supporter Mary as well.

And who would deny that Mary was like a tower, strong and faithful, as she stood beneath the cross of Jesus, one among few others, whereas most of Jesus’ male disciples had fled, as all gospel accounts confirm?  Mary was among those few who didn’t give up on Jesus, who stood by his side until the bitter end, disregarding any danger for her own life – there is historical evidence that the Romans crucified women as well.

All gospel accounts agree that Mary was among the first ones to come back to the tomb on the third day, to be one of the first witnesses of Christ’s resurrection.  The gospel according to John, which we heard today, elevates her status even more by pointing out that she was the only one going back to the tomb to embalm Jesus’ body.  Mary is a crucial part in this story of the dying and risen Lord, a first-hand witness, someone who faithfully stands by Jesus as most others lose their faith and their courage. And so she is a model of faith and faithfulness for us.

She was called the “Apostle to the Apostles”, the one who truly prepared the way for the spreading of the good news that Christ is risen, the foremost Apostle, if you will. Mary more than deserves the honorable name “the tower”.

Now we live in a day and age where name calling mostly is of the nasty kind, and most of us probably were subjected to this kind of nasty name calling at some point in our lives. We may have heard that we are losers, snowflakes, a fatty, fag, an ignorant idiot, a bitch, the n-word, illegal, senile.

Right now we live in a political climate where seemingly neutral terms are used as a derogative, like liberal and conservative.

I think as Christians, we are called to let go of all that nasty name calling and instead to remember what Christ calls us and all: light of the world. Salt of the earth. Beloved, children.

God has the power to take us, to take all the names and attributes others carelessly give us, and to change them into something god and meaningful. After all, God turns Mary, the one with the 7 demons, into Mary, the tower.

God sees us with different eyes.  God calls us by name, and it’s a name spoken in love. And I invite you to take a moment and listen: what is the name God is calling you?

God’s love changes us, and God calls us by tender, honorable, and encouraging names. This is something Mary, the Magdalene, Mary, the strong tower, can teach us. We are redeemed and transformed by God’s love. And as the redeemed and the transformed, we are strengthened and called to go and actually be, to embody that which God calls us – for the glory of God and the sake of the world.

So go and be: salt, light, a rock, a tower, a mover and shaker, a Protestant, wise, thoughtful, generous – beloved – children of God. 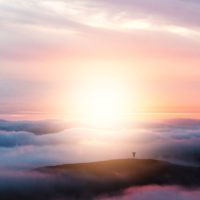