Just a couple of days ago, we celebrated the 4th of July, the day on which, in the year 1776, the Declaration of Independence from British Rule was ratified.

Have you ever read the Declaration of Independence? I admit I just did in preparation for this sermon. And I’m glad I did, because I learned a few things I didn’t know and which surprised me.

Now most of us may know the famous preamble of the Declaration of Independence: “We hold these truths to be self-evident, that all men are created equal, that they are endowed by their Creator with certain unalienable Rights, that among these are Life, Liberty and the pursuit of Happiness.”

Now we have to be careful about the interpretation of ‘all created equal’ and of ‘all men’; as so often, man had other ideas about that than the all-gracious and all-loving God, creator of all. First of all, according to the Founding Fathers, ‘all men’ meant just that: men only – and this was applicable for free men only.

There are two great original sins of this country: Native Americans were subjugated with brutal force, often killed in the process, and robbed of their territories and way of life. Africans were imported to do menial work in the plantations – and these slaves were treated as property, and not much better, if not worse, than animals. European settlers dehumanized entire populations for their own gain.

It took until the 1920s until Native Americans were granted citizenship rights, and it wasn’t until the 1960s that the descendants of slaves were granted the same rights anyone else enjoys in this country. Except that Native Americans, African Americans and other minorities in reality are still treated as second class citizens in many ways and many parts of the country and institutionalized racism abounds.

However, there was a certain broadening of the understanding of ‘all men’ in the Declaration of Independence. Let me go back in history a little further to explain: one of the grievances against British rule, and especially King George III, listed in the Declaration of Independence is the suspension of the so-called ‘Plantation Act’ from 1740. In it, the British Kingdom offered a way to British citizenship in its Northern American colonies to people of all Protestant confessions – exceptions for Quakers and Jews were also made, but Catholics were excluded. Catholics, mostly from Ireland, could reside in the colonies, but were restricted in regards to landownership and didn’t have the rights of a citizen.

Pretty much everyone else could become a British citizen after a residency in the colonies of 7 years, publicly confessing their Protestant faith – or, in case of Quakers and Jews, the acknowledgment of the Protestant faith – and the payment of 2 Shillings.

This for its time very liberal ordinance was meant to entice people from all over Europe to help populate the New World – and strengthen the British Kingdom. And, since this kind of religious freedom was not available to many who strayed from the predominant confession in their respective homelands, people took advantage of this prospect of living their faith without having to fear repercussions or persecution. The colonies thus became a refuge and land of opportunity for many.

King George III, in an effort to weaken the rebellious colonies, suspended the Plantation Act in 1773 and prohibited immigration to the colonies – a decision that was seen as tyrannical in the colonies, and thus it is mentioned as a grievance in the Declaration of Independence.

The signing of the Declaration of Independence signified a break-through for Catholics – in fact, one of those signing was Charles Carroll, a Catholic from Ireland. The idea of religious freedom in the new United States was broadened. And said Charles Carroll, who turned out to be the last surviving founding father, set the tone for the future. In 1826, the 50th anniversary of the signing of the Declaration of Independence, he wrote: ‘I do hereby recommend to the present and future generation the principles of that important document as the best earthly inheritance their ancestors could bequeath to them, and pray that the civil and religious liberties they have secured to my country may be perpetuated to the remotest posterity and extended to the whole family of man.’

By the way, he did not only talk the talk, but walked the walk: like many of the founding fathers, he owned several hundred slaves, but saw the error of his ways and granted them freedom.

And with time and the territorial expansion of the U.S., the understanding of citizenship was indeed broadened to eventually include women, and people of all ethnic backgrounds and religions. This is what made the United States what it is today. This is what defines the American dream: life, liberty and the pursuit of happiness for all who come here. A dream that sadly many currently see endangered.

But: for most of its history, the United States has been a place where people from all over the world had a chance to leave a society behind where they’d be confined by their religion, ethnicity or, more often than not, their social-economic status, and start over anew, reinvent themselves. The story of German immigrant Claus Spreckels, who ended up in San Francisco, is a prime example for this opportunity. He left Germany in the 1840s with just 1 Thaler in his pocket and died a multi-millionaire (and if you want to know more about him, ask me after the service).

So this week, we celebrated the freedom and opportunities for all who have come here, leaving the old behind, seeking and building something new, redefining society by building one of the most unique and diverse societies on this planet. And there were religious leaders for whom this New World seemed like the perfect place to create a society that is based on the principles of Jesus Christ and the vision of the peaceable kingdom of God, in which all are welcome and people from all the ends of the world will be part of the heavenly Jerusalem – a city, where the pearly gates are always open. And this is a vision, a dream that we are still chasing in this country, not giving up hope that it can become a reality.

Today’s gospel story describes how revolutionary and scandalous Jesus’ life and teachings were in his day, how they turned everything upside down. A few Sundays ago, we already heard how Jesus was rejected by scribes, townsfolks and his own family: he’s in cahoots with Satan, he’s out of his mind!

Today this narrative continues: Jesus is back in his hometown, where he grew up and became a carpenter, a builder. As a craftsmen, he was part of the lower blue collar class. He probably received minimal education. Offhand, in the eyes of the society he grew up in, he is not rabbi material – gifted boys would be identified and educated from early on, and only the brightest and most studious ones became part of the religious upper class.

As Jesus is teaching in his hometown synagogue, the people who have known him as the working class boy and man can’t wrap their heads around the fact that Jesus is breaking the mold, that he is crossing the invisible boundaries of societal status. In Jewish society of Jesus’ day, as in the majority of societies all over the world, sometimes up to this day, someone is defined by the place they are from – the geographical place, family of origin, but also their place in society. To the people of Nazareth, Jesus is nothing short of an impostor – who does he think he is?

Not surprisingly, he isn’t able to perform miracle healings in Nazareth – or only a few. People don’t trust him. People don’t have the faith that God could do amazing things through this man they only know as common, of dubious origins even. Jesus and his power are stifled among his own people. They just can’t see how God’s kingdom could be present through him. They try to put him in what think is his place – go back to where you came from! But, thanks be to God, Jesus is not fazed by their unbelief and lack of vision.

Not only does he go to the places where people trust in his powers and ministers to the people there – no, he sends out the twelve and gives them authority to drive out unclean spirits – and to be part of God’s kingdom that has come near. Now remember who those twelve were. Fishermen. A tax collector, which means a despised collaborator of the Roman colonial power. Judas Iskariot, a member of a rebellious underground force that sought to drive out the Romans and their collaborators – with violent force. Misfits, commoners, country bumpkins, people who even naturally would be on opposite sides, all united in this group of Jesus’ closest collaborators.

These men Jesus sends out to proclaim through word and deed that the kingdom of God has come near. Not the educated elite. Not the smart or accomplished or gifted ones.

Jesus continues to break the mold, he is crossing invisible boundaries of society and turns human perception of one’s place in society upside down by not sending the best – but those open to receive the loving and gracious power and authority of Christ and to allow this power to work through them.

At some other point, Jesus sends out 70 disciples, and it can be assumed that there are women among those, since we know for sure that Jesus had many woman followers.

This is how Jesus Christ lives the vision of the kingdom of God in the midst of world and society: a kingdom where all are brothers, sisters, siblings, children of God, created equal. A kingdom in which, as Paul writes, there is neither man nor women, Jew or Greek, slave or free. A kingdom that knows no color of skin – Ethiopia was the first nation to adopt Christianity as a state religion in 330, closely followed by the Roman Empire in 380. A kingdom where societal norms and expectations and confines are transcended and overcome by God’s purpose for all who are created lovingly in God’s image.

A kingdom where God calls and uses people like you and me, with our gifts, our flaws, our dreams and disappointments – calls us to be open to God’s loving and gracious power and authority and to let them work through us.

We are all from somewhere – country, class, family. We may and should appreciate and celebrate the land that we love, the land that is home to us. May we further strive to make this country a country in which we acknowledge in word and deed that truly all are created equal and are endowed with unalianable rights, among them life, liberty, and the pursuit of happiness. But in all of that, may we not forget that our first and foremost allegiance is to something that is even greater: Jesus Christ, whose law of love is above all laws and who makes us into a new creation – no matter, where we are from. Amen

Photo by Frank McKenna on unsplash.com 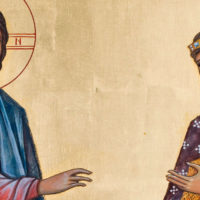