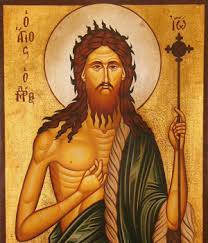 I have to admit it: Advent is my favorite season on the church calendar. There’s just something about this time pregnant with anticipation, mystery and hope.

Some of it, I am sure, stems from my childhood. We were not a religious family, but it was just those little things, like lighting the candles on the Advent wreath every Sunday by ‘Kaffee and Kuchen’ and the opening of the next door on the Advent calendar, that taught me about what it means to expect – with this giddy kind of joy.

What are some of your favorite things during the Advent season? The lights? The music? Time with family?

But each year during this season, we hear this annoying and disturbing voice: ‘You brood of vipers!’ ‘The kingdom of heaven has come near!’ ‘Repent!’ ‘He who comes after me will baptize you with the Holy Spirit and with fire!’ ‘Prepare the way of the Lord!’

I have to say that each year I’m thrown off somewhat by this voice we hear in the wilderness, the voice of John the Baptist.

Each year in Advent, we encounter this strange figure: John, in Hebrew Yochanan.  No matter which of the Gospel accounts we take, he is present: in Matthew, Mark, Luke, and John.  We can’t escape the message of this man, no matter how hard we try to drown out his message by the sweet sound of Christmas Carols. Prepare the way for the Lord!  Repent!

This message is important to those who wrote the Gospels down, even much more important than the circumstances of Jesus’ birth, about only Luke and Matthew have something to say.  In the Gospel according to Mark, John is the first person to make an appearance, he sets the stage for everything else to come. And what is to come? The kingdom of God has come near! And how do we experience this kingdom? Well, here John’s name gives us a clue.

The Hebrew name Yochanan means “God stoops down”, “God bends down”, or, in a more allegorical sense, “God has compassion”.  What a beautiful name!  What a strong message: Yes, God bends down in compassion to those who are lost, those who are ill, those who are at the bottom and on the crooked roads.  This is how God’s kingdom comes to us and among us. And John not only preaches this message, he embodies it.

God stoops down. That’s the story of the gospel. That’s God’s direction, to go after us, down to where we are, in the pits of life, in the traps of our self-centeredness and worry.  God’s on his way.  But there seem to be many roadblocks, erected by us.

Repent.  I bet at least most people wouldn’t be able to tell you what repent means.  It’s an old word, not used much in our day and age anymore, definitely not in the public or political life.

Now we all know you can’t just change your behavior.  You can’t just change your direction in life from one moment to anohter. Anyone here who tried to quit smoking or drinking or overworking or tried to eat and live healthier will attest to that.  First, your thinking and feeling about something need to change.  Your attitude towards something needs to change in order to have a turn-around in your life.

Maybe this is the essence of what we call sin: that we are just treading on, though we should know better.  We nurse a grudge.  We revel in our hurt feelings.  We do the same old thing over and over though we know the results have been less than satisfactory in the past.  It is hard to let go, it is hard to change our direction, it is so hard to turn around.

Maybe that’s why all the Gospel writers think that John’s message is so important to hear, through the ages, across the world: Repent!  Repent, repent, repent!  God is bending down to you, God’s on the way to you.

Yet we often seem to choose to walk the other direction: toward judgment instead of forgiveness.  Toward indifference instead of compassion.  Toward destruction instead of planting and tending.  Toward death instead of life.  Away from God…

But, but – and herein lies the mystery and the miracle of Advent: God is still after us, stooping down, overcoming all roadblocks and all obstacles we put in God’s – and in our own – way.  And God so longs for us to repent, to turn around, back to where we all came from: a loving and merciful God – the God who gave us life and wants life eternal to the fullest for all of creation.

And we see this longing in God’s ultimate gift to us: the child in the manger, a feeding trough, in a smelly stable. How much lower could God go? How much more could God bend down to us and show us compassion?

God bends down to us. God is coming to us. God is with us. God is our source and our goal. This is at the heart of John’s message, a message that is so important as we observe Advent – a time pregnant with expectation, mystery and hope.

The kingdom of heaven is near! Repent. Prepare the way of the Lord.  Let your hearts and minds be changed so that God’s realm of peace will be in us and among us.