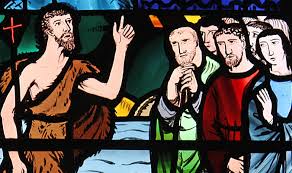 Ain’t we all hungry for some good news in this day and age, in a time when our daily news headlines talk more about corruption, decay, and disaster than anything else? Some of the news of this last week: there was no indictment for the NY police officer who used an illegal choke hold on a black man, who consequently died. Ever since, there have been various protests and demonstrations, some of them violent.  We have had some of these protest in our own backyard, in Oakland and Berkeley.4 people were stabbed on an Amtrak train in Michigan. After a severe drought, California was finally blessed with some rain – however, some of the storms were so strong that roads were washed away, and some folks had to leave their homes.  Just13 months after Typhoon Haiyan, the Philippines now have been hit by yet another super typhoon.

John the baptizer appeared in the wilderness, proclaiming a baptism of repentance…

Boy, Mark cuts right to the chase, doesn’t he?  There are no flowery greetings, there’s no lengthy introduction, no sentimental birth story, no angels.  The very first story in the gospel according to Mark isn’t even about Jesus, but John, the Baptist.  The first thing we hear is the ancient voice from ages past, the old prophecy spoken through the prophet Isaiah: See, I am sending my messenger, a voice crying out in the wilderness: prepare the way of the Lord!

This is the only introduction we get; the link to the past, the hint at God’s hand mysteriously at work through history.  John, if you will, is this link to the past, the hinge between the old and the new covenant, the messenger who prepares the people of God for the Messiah to come. And John’s message is a message we are still hearing today, after all these centuries: prepare!  And then we are right in the story of Jesus’ mission and death.  Today we heard the first 8 verses of the gospel according to Mark – within the next 12 verses, Jesus is baptized by John, tempted in the wilderness, calls his first disciples, and starts his ministry in Galilee.  12 verses!

Mark’s gospel has such and urgency to it, such an enthusiasm.  He wants to tell the story, without any flourishes, he wants to get the message, the good news across. Mark wants the audience of his day and any audience that comes after to hear this story, hear the good news.  I am sure Mark would have liked text all the modern ways of communication, like Facebook, Twitter, and text messaging; it probably would have served his style and purpose well.  Say it, get the message out, and don’t waste time on details.

What is the beginning of the good news?  Is it John the Baptist, the one who prepares the way?  Is his message of repentance, of turn-around, good news for us?

I think there’s a lot to this interpretation.  Well, most of us probably like their set ways and get a little uncomfortable when we hear the call to repentance, a call to re-assessing our ways.  And this actually is the effect John the Baptist had on many folks who were part of the Jewish establishment and who heard what he had to say.  They were put off by his message and couldn’t see any good in it. Why change?

But then there were all those who flocked out to him into the wilderness, the country people, the ones who were not a part of the upper crust, the ones whose lives were difficult, the ones who hoped for a turn-around. And of course we know of folks still today, for whom life isn’t great, and who long for a turn-around in their lives. Those who need to hear a word of hope in the darkness of their existence. That a turn-around is possible.  And in this sense, John and his message are good news: there is always a chance for a new path, a change of heart and mind, a turn-around.  God doesn’t leave us hanging in all the cul-de-sacs, all the seemingly dead ends in our lives, but forgives us and offers us guidance for a way out.  And John’s message may sound a little harsh, but isn’t it the case that we sometimes need a whack over the head because we won’t get the message and listen otherwise?

Maybe the beginning of the good news is Jesus’ baptism, his official authorization by God, if you will, to go out and start his ministry.  Jesus’ calling, out of a rather regular life as a carpenter with this total turn-around to a life on the road, ultimately the road to Jerusalem and the cross.

Maybe the beginning of the good news is the first part of Jesus’ mission, his gathering of disciples, his journey through the Galilean countryside, his preaching, teaching, and healing of people.  And who wouldn’t agree that this part of the story is good news, we see God right in action among God’s people, God with the people.  Then, of course, followed the trial and crucifixion, and though the disciples didn’t think this to be good news at first, this is the climax of Jesus’ service to us: the death on the cross for the forgiveness of our sin, the ultimate good news for us.

God isn’t finished after the death and resurrection of Jesus.  The story continues.

This theory actually may be supported by the ending of the gospel according to Mark.  What we find in our Bible today is an edited ending, something got tacked on. But the last words of the original ending are:  and they said nothing to anyone, for they were afraid.

“They” are the women who come to the grave, who hear the message form the angel, and who get the task to tell the disciples about it.  And the women said nothing because they are afraid.  What a lousy ending to a gospel!  And this ending cries out for a “to be continued”, for more stories, for more good news.

Many, many continued to live the good news.  We have almost 2000 years of Christian history to prove that Christ continued to be God Immanuel, God with us, often through the hands of people like you and me.  Now we all know that Christian history wasn’t all good news, that many atrocities were and still are committed in the name of Christ – but whenever someone shows mercy and kindness, whenever there is true forgiveness, whenever hope is spread, whenever people stand up for justice and fight for the dignity of all God has created, we see God at work, through us, among us.

St. Matthew’s has been part of the continuation of the good news for the past 120 years.  But the story isn’t finished.  We can’t just look back and marvel at the good ole days, but have to ask ourselves: how does God want us to continue the story, the good news that St. Mark, the evangelist, started to write down?

Maybe it involves repentance John the Baptist is calling for, a turn-around from our set ways and the exploration of some new venues.  Maybe it involves the urgency that Mark demonstrates in getting the story across.  Maybe it involves doing what Jesus did in the first phase of his ministry:  going to where those are who desperately need God and offering them a word of hope, deeds of hope, and healing.  Maybe it involves going the tough road to the cross, some sort of death and resurrection.  I have the uneasy feeling that continuing to listen to God and to live the good news today may involve all of the above and then some.

And I think we all have an idea how we can be good news.  Sometimes we just need to show up and be present with someone, and in a sense be the presence of Christ. We are good news to someone when we speak a word of peace and forgiveness. Sometimes we have to speak up and protest when there is injustice happening around us.Through our canned food donations and things we contributed to the kits we put together a couple of weeks ago, we become very good news to the homeless and the hungry. And, and, and. And we have to keep all of this up, just to let God’s light shine in the darkness of all the bad news around us. The good news of Jesus Christ, this story continues through us.  We meet Jesus in the word that tells us the good news – and in the word that calls us to be good news to others. We are the body of Christ.  We are the bearers of hope.  May our lives be good news for all. 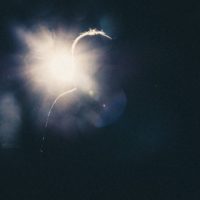